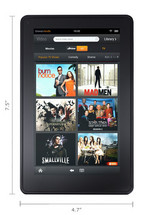 EN→DE
The Fire has thinner borders around the screen than the Fire HD, and looks less clunky and old fashioned. It still won't win any style awards, and it's not especially light at 400g - the same weight as the Fire HD, give or take. The Fire measures 189 x 120 x 11.5mm, making it 17mm shorter and a fraction thicker. Its design is different to the Fire HD in that it's very similar to a traditional E-ink Kindle, and designed to be used in portrait mode.
Vergleich, online verfügbar, Mittel, Datum: 06.11.2013
70% Amazon Kindle Fire HD review: now cheaper but is it a good buy?
Quelle: Tech Advisor

EN→DE
Although a £129 tablet sounds tempting, the Kindle Fire isn't nearly as good as the Fire HD. It really is a no-brainer to spend the extra £30, since you get an extra 8GB of storage, a higher-resolution screen, better speakers, volume buttons, an HDMI output and twin antennae for the Wi-Fi radio (and Wi-Fi also works on 5GHz, which means it's much faster if you own a compatible router). Bear in mind that Google's Nexus 7 is more versatile than both Kindles and doesn't lock you into buying content from Amazon.
Vergleich, online verfügbar, Kurz, Datum: 19.12.2012

EN→DE
Overall it looks as if the Nexus tablet has got its main competition licked, although like every new player in this market it will struggle to take on Apple's iPad. Perhaps it's just down to Microsoft and its Surface tablets to challenge the Cupertino giant.
Vergleich, online verfügbar, Mittel, Datum: 28.06.2012

EN→DE
When reviewing the Amazon Kindle Fire we found ourselves constantly revisiting the price point and, with that firmly in mind, were probably willing to cut it more slack than we might have had it cost the same as the Motorola Xoom, or Samsung Galaxy Tab 10.1.
Einzeltest, online verfügbar, Kurz, Datum: 15.02.2012
Bewertung: Gesamt: 100%
60% Amazon Kindle Fire
Quelle: Techtree.com

EN→DE
For Rs 14,000, the tab offers a good capacitive touchscreen, a long battery life, and decent multimedia options. However, the lack of an app store and Cloud support (for India) is a letdown. Moreover the sparse connectivity options also weakens the device's case as a good tablet. However, if you are looking for a budget tablet, the Kindle Fire is definitely is a better option than Reliance 3G Tab and the Spice Tab Mi-720.
Einzeltest, online verfügbar, Sehr kurz, Datum: 27.01.2012
Bewertung: Gesamt: 60% Preis: 60% Leistung: 70% Ausstattung: 60% Ergonomie: 60%
The Kindle Fire: The End of Books?
Quelle: Tom's Guide

EN→DE
Unless you have someone begging you for a tablet for the holidays, we suggest holding-off until after the new year, and waiting for Amazon's next tablet offering. Purchasing the Fire will make you an early adopter, rushing to buy a tablet from a company that is new to this game. Plus, with quad-core tablets like the Asus Transformer Prime now and/or soon hitting the market, you might be thankful that you waited.
Einzeltest, online verfügbar, Lang, Datum: 09.12.2011

EN→DE
The Kindle Fire is a nice-looking tablet, and, at 200 bucks, Amazon is going to sell a shedload of them. Its flaws are well balanced by the low price, and it's a logical upgrade if you're already a Kindle owner and you want to buy videos, music and apps from Amazon, not just books.
Einzeltest, online verfügbar, Mittel, Datum: 25.11.2011
Bewertung: Gesamt: 75%
Amazon Kindle Fire Review: Can $200 Buy a Great Tablet?
Quelle: PC Perspective

EN→DE
Overall, the Fire strikes me as a tablet for people who don’t like tablets. It’s for the person who would never think of connecting an external keyboard. It’s for the person who doesn’t see the point of holding up a screen and swiping around to navigate the web when they can plop down in front of a PC. It’s for the person who wouldn’t touch Android gaming with a ten-foot pole. For this user, most of the Fire’s downsides are irrelevant, and it all comes down to watching movies, listening to music and reading books. My only question is - how many consumers fit this niche? I guess we’ll find out.
Einzeltest, online verfügbar, Lang, Datum: 25.11.2011

EN→DE
My out of the box experience with the Kindle Fire was not as good as I had expected. Sure, the very initial setup was a breeze, since it logged in my Amazon account automatically (which it won't do with devices bought at retail stores or ordered from Amazon as gifts), but the user interface somewhat got in my way, and the touchscreen didn't always seem to respond well in my first hour of use. Having to hunt down the missing hardware button functionality for home and volume also took some getting used to. But after a day or so of using it, I'm pretty much settled in. I initially thought I would end up returning the Kindle Fire, but now I think I'm going to keep it. I like its media consumption abilities, and I like the compact form factor.
Einzeltest, online verfügbar, Mittel, Datum: 24.11.2011
Bewertung: Gesamt: 70%
Kindle Fire Review
Quelle: Ubergizmo English

EN→DE
The Kindle Fire is a device that does exactly what Amazon wanted it to: it is affordable and provides an easy way to consume more content from Amazon. This is definitely not a “killer” for larger and faster tablets, but at the very basic level, it is a good multimedia player with a store access, and it is basically the best mobile interface to Amazon.com.
Einzeltest, online verfügbar, Sehr kurz, Datum: 23.11.2011

EN→DE
Amazon have really struck gold with the Kindle Fire. They have managed to produce a high quality tablet at a price that many thought impossible. Sure, the Fire isn’t as feature packed as the iPad, lacking a camera and other features such as GPS, but when you compare $199 to $500+ it really is quite remarkable just what you get for your money.
Einzeltest, online verfügbar, Sehr kurz, Datum: 23.11.2011

EN→DE
The Amazon Kindle Fire is a good, but not great device for reading books, watching movies, playing games, and surfing the web. But for $200, you’d be hard pressed to find a better device.
Einzeltest, online verfügbar, Lang, Datum: 23.11.2011

50% Kindle Fire vs. Nook Tablet: Which Should You Buy?
Quelle: PC World

EN→DE
The Amazon Kindle Fire makes trade-offs to achieve a $200 price. It's easy to dismiss some of the compromises and weaknesses of the Kindle Fire as the sacrifices necessary to achieve a price point, but the reality is that the Fire may not meet your expectations if you're looking for an Apple iPad 2-like tablet.
Einzeltest, online verfügbar, Kurz, Datum: 15.11.2011
Bewertung: Gesamt: 50%
80% Amazon Kindle Fire
Quelle: PC Mag

EN→DE
The Kindle Fire is one of a kind, at least this week. It's the first affordable, easy-to-use general-purpose tablet. It doesn't replace the Apple iPad: It complements the iPad, which is bigger, more powerful, more expensive, and has far more apps. While there are other good small tablets out there, most notably the Acer Iconia Tab A100, they're also more expensive and just more fiddly. While geeks have more options with a "generic" Honeycomb tablet, non-geeks get less guidance as to what to do with them.
Einzeltest, online verfügbar, Mittel, Datum: 14.11.2011
Bewertung: Gesamt: 80%
80% Amazon Kindle Fire Review
Quelle: Stuff TV

EN→DE
In many ways, the Amazon Kindle Fire isn't trying to beat the iPad or the Android-tablet masses at their own game. The Kindle Fire is doing its own thing, and going after a totally different audience.
Einzeltest, online verfügbar, Kurz, Datum: 29.09.2011

EN→DE
At the end of the day you have to decide what your needs are and which tablet device might suit you better. Sure, there are a ton of other tablet options out there, but frankly I think it’s going to come down to Apple and Amazon being the big players in the tablet market. If you’re starting to shop for a tablet these are the two to start with when looking. If you need a fully fledged tablet that would allow for video chat, using productivity apps and taking advantage of a vast library of software already available then the iPad is the way to go if you can afford it. If you just want something for being able to browse the web or watch movies on the go, so long as you know you’ll have access to wi-fi where you plan to use it, the Amazon Kindle Fire is a good fit.
Einzeltest, online verfügbar, Sehr kurz, Datum: 29.09.2011

EN→DE
It's a tough choice. On one hand, the Kindle is perfect for those on a budget as it's cheap, has a long battery life and plenty of content. However, for an extra £25, we're tempted to go with the Sony Reader as it's lighter, has better build quality and touch-screen functionality that makes it so much easier to use.
Einzeltest, online verfügbar, Mittel, Datum: 20.09.2011 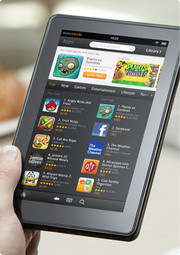